From the Association of American Railroads (AAR) Rail Traffic Data.

Graphs and excerpts reprinted with permission.

Huge swaths of the U.S. and global economies remained shut in May and the impact on rail traffic was predictable. Total U.S. carloads fell 27.7% in May 2020 vs. May 2019, the biggest year-over-year decline for any month on record (eg, year-over-year comparisons begin in 1989) and were worse than the 25.2% decline in April. For intermodal, things were bad, but not as bad: originations were down 13.0% in May, better than the 17.2% decline in April. 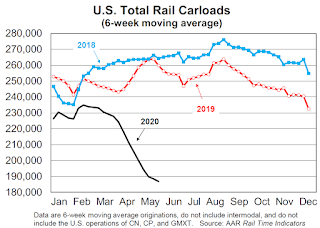 Average weekly total carloads of 185,043 in May 2020 were also the lowest on record. Of the 20 commodity categories tracked, just one (farm products, excluding grain) had carload gains over May 2019. 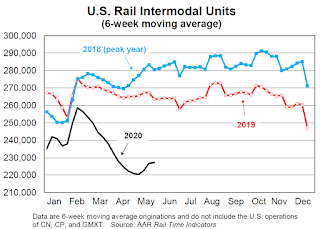 U.S. intermodal originations were down 13.0% in May 2020, an improvement from the 17.2% decline in April 2020, but still the 16th straight year-over-year monthly decline for intermodal. Prior to the pandemic, the average monthly decline was around 6%, which is clearly much less than the declines of the past two months. Intermodal is suffering from, among other things, weak consumer demand and fewer cargo ships calling on U.S. ports.

In closing, it should be noted that rail traffic was weak prior to the pandemic.

This website is all about economics, commerce, business logic, and enterprise; utilizing the best thinking to find the best ideas.